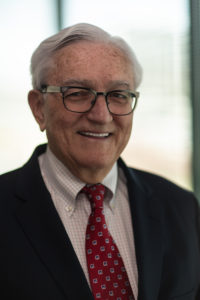 Mr. Thorn received a Bachelor of Science degree in Aerospace and Mechanical Engineering (Cum Laude) from the University of Arizona in 1967. He is a former Board member of NAIOP and is a Full member of the Urban Land Institute (ULI), and a member of the ULI Executive Committee. He is a former Denver Urban Renewal Authority (DURA) Commissioner and served on the Management Group of the Downtown Denver Partnership, where he was Chair of Downtown Denver, Inc., in 2002 &2003, and Chair of the Downtown Denver Partnership in 2004. He is also a founder and past Chairman of Transportation Solutions, the Transportation Management Organization serving central Denver, Cherry Creek and close-in Southeast Denver.

Mr. Thorn has spent a career working with local municipalities, the Regional Transportation District (RTD), Colorado Department of Transportation (CDOT), and other governmental entities to achieve common goals in the development of transit oriented communities and bring the public and private sectors together to achieve these goals.   Mr. Thorn Co-Chaired the Finance Committee for the Guide the Ride Campaign and led the Downtown Denver Partnership fundraising efforts for both the successful Southeast Corridor/TREX Campaign and the FasTracks Campaign and has been active in transit issues and related legislation for the past thirty years.

In 2011, Mr. Thorn was the co-recipient (with Mr. Buz Koelbel) of the inaugural Transit Alliance Leadership Award as Outstanding Leader in the Private sector. In 2001, Mr. Thorn was named Honorary Dean of the Burns School of Real Estate and Construction Management at the University of Denver and is currently serving DU as Executive in Residence.